Remember movie I've Had Enough with Michael Douglas? There, an ordinary employee in a white shirt, with a tie and a briefcase was trying to get to his ex-wife's house to congratulate his daughter on her birthday. Along way, he encountered obstacles that had to be overcome with a bat.

The main character of The Plane Effect is somewhat similar to him. He is an office plankton, in a shirt, with a tie and with a briefcase in his hand. And then one day, as usual, he goes home from the office, but along the way he encounters obstacles. However, they are more serious than those that interfered with the hero of Michael Douglas - first he was devoured by a huge worm, and after a while a beetle the size of a house attacked…

Yes, we must make a reservation right away: The Plane Effect is a surreal game, even arthouse somewhere, and what is happening with the main character often resembles delusional fantasies. As if tired of boring life, he either went crazy, or came up with such an unusual adventure, where he overcomes monsters not by force, but by cunning, controls robots, plays hide-and-seek with security drones and what else does not do. And even makes a flight into space. 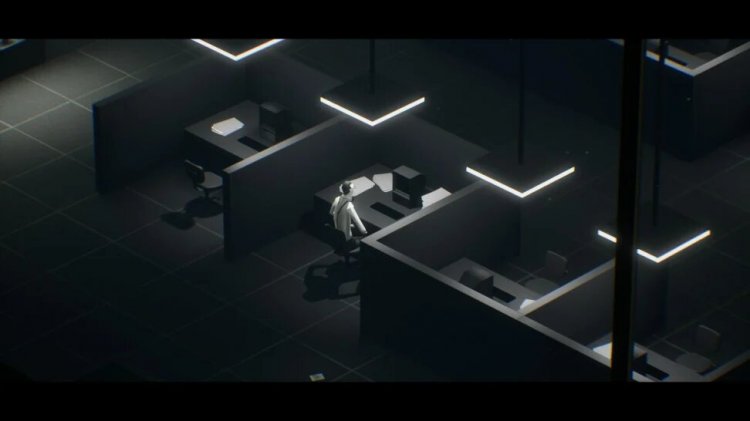 Although, of course, everything is not so clear. The question of what it was was tormented for a long time after the final credits. More than once or twice we are given to understand that people with cameras are watching the hero and his adventures. Is this some kind of "Truman Show" in which he participates without knowing it? 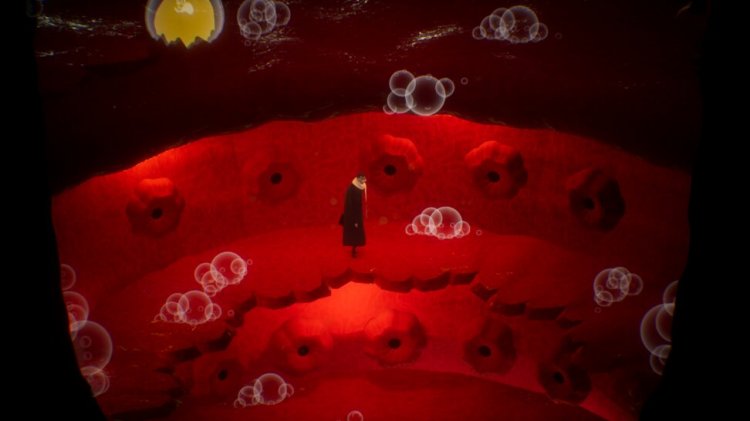 And why at some point we see blood in the apartment and signs of police work? The body is circled with chalk, plates with numbers are placed everywhere, as is done when evidence is recorded, and bloody footprints lead from room to room. Maybe the hero, having gone crazy from routine, killed his family? And now, in delirium, finding photos of relatives everywhere and chasing a paper airplane made by his daughter, trying to reunite with them — at least there, in space, among the stars, because there is no place for him on earth anymore? 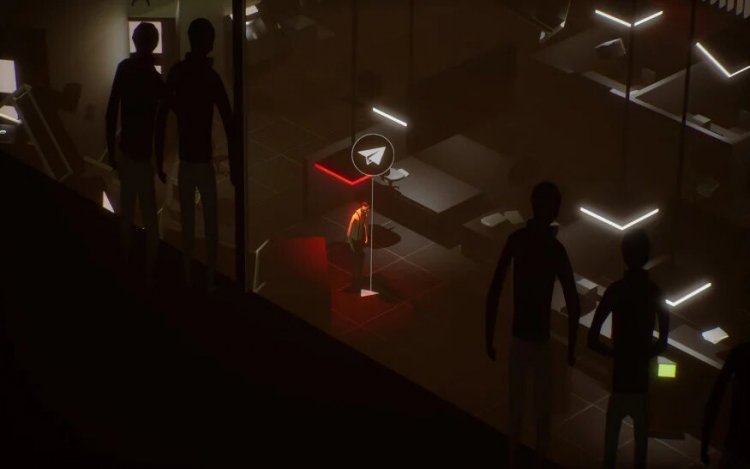 There is no definite answer, but in any case it will not be boring. We will visit the inside of a huge worm, and we will meet a crowd of faceless mannequins, similar to the same office workers as our hero. 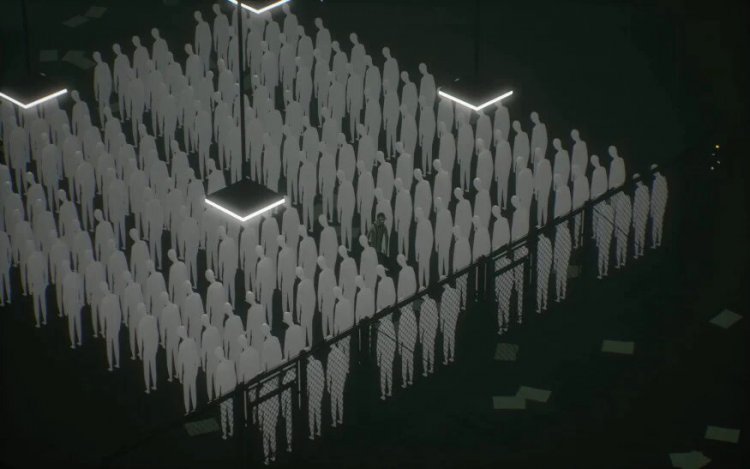 And we'll get stuck knee-deep in snow, and we'll ride across the prairies on a trolley, and we'll drive along the night highway by car. During such a road movie, The Plane Effect most resembles Kentucky Route Zero - the style, music, surreality and general mood are similar in many ways, although Kentucky Route Zero is, of course, more epic and clever. 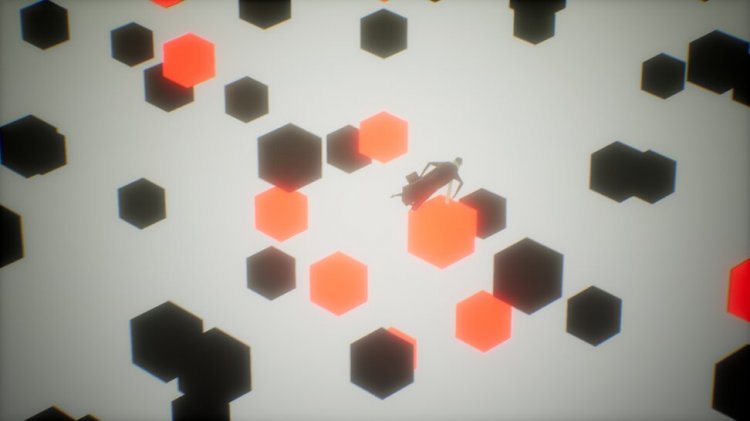 In search of logic and scripts

I have already said that we solve problems in The Plane Effect not by force, but by cunning. Yes, this is an isometric adventure with riddles and quest elements. It's a pity, the gameplay itself turned out to be ambiguous. On the one hand, there are many situations. In the belly of a huge worm, we play different instruments, and during the night road movie we build a giant slingshot to jump over the abyss by car. 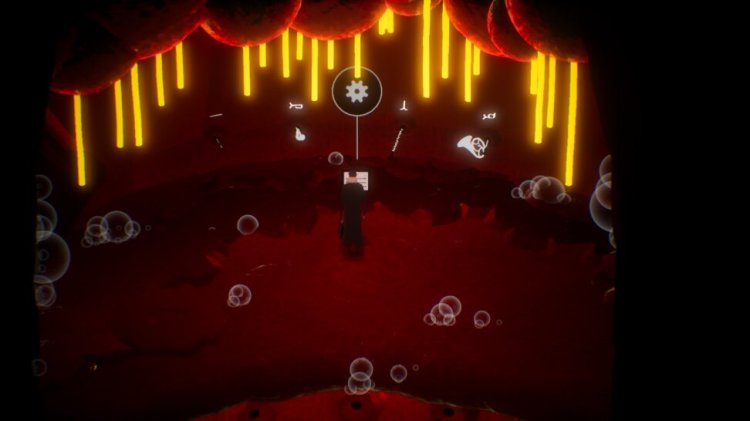 Then we also go boating, maneuvering among sharks and bombs. We turn valves and levers in factory and warehouse premises, control robots, switching between them in futuristic interiors, and even switch between different versions of the main character in our office (from different time lines?). You can hack into an old-school arcade on an old slot machine, jump on platforms, catch the keys to the door on a fishing rod and even arrange a high-speed descent through the guts of a worm, using a briefcase as a board. 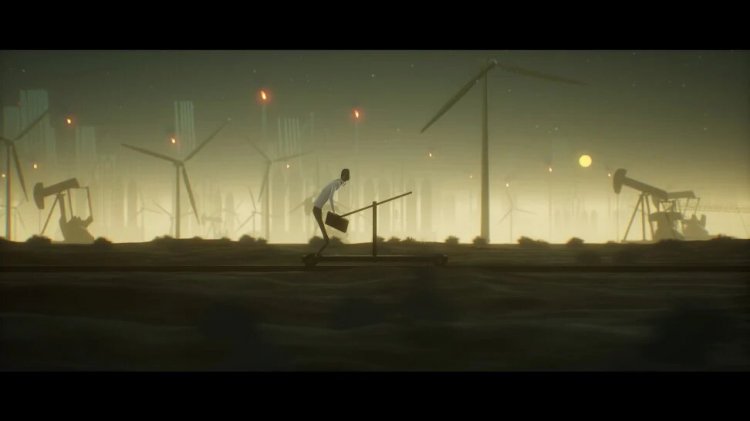 On the other hand, the riddles are too linear. For example, if you see steam that prevents you from going to an obviously useful pickaxe, you will not be able to turn the valve and remove it until the character finds a wall that needs to be broken with this pickaxe. And even if you notice a fishing rod, with which, obviously, you need to pull the keys out of the pool with poison, the character will still shake his head and will not pick up the object until he finds a horseshoe for this fishing rod. And such situations are at every step. They begin to annoy — we have to perform a sequence of actions known only to the authors with their not always clear logic.

It's one thing when we have to find a huge hammer to "weigh down" the hero — he will stop taking off on air currents from a huge fan. It fits perfectly into the setting - surrealism, what to take from it! And it's another thing when you need, without really understanding why, to drive a bird onto an advertising signboard, which is under its incredible weight (it's a pigeon!) it will fall and help us deceive the security bot. Here you can already feel the artificiality and tension of what is happening. In addition, the game does not have too responsive controls, which causes problems during jumping stages.

However, in general, The Planet Effect pleases. And how could it be otherwise in a game that resembles Kentucky Route Zero in places, even if it is inferior in genius? The authors came up with an unusual story, the meaning of which is not so easy to unravel (but interesting!), drew a variety of surreal locations, wrapped it in atmospheric music and packed it into a stylish picture. Yes, the gameplay is not perfect, but it is largely saved by a variety of situations. So if you like non-trivial puzzles, entertaining stories that you have to break your head over, and otvyazny surrealism in the spirit of Kentucky Route Zero, then it's definitely worth trying The Plane Effect.

Pros: an unusual story that makes you wonder what it was; a lot of interesting situations; cool art design; an abundance of surreal scenery; atmospheric music.

Cons: many riddles are far-fetched — to solve them, you need to try to find a known sequence of actions for one author; not the most convenient management.

The network has information about the PCIe 12VHPWR power connector for GeForce GTX... 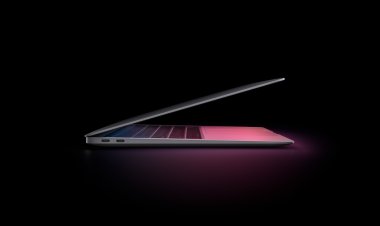 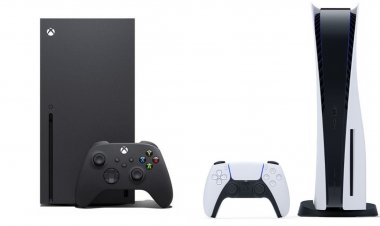 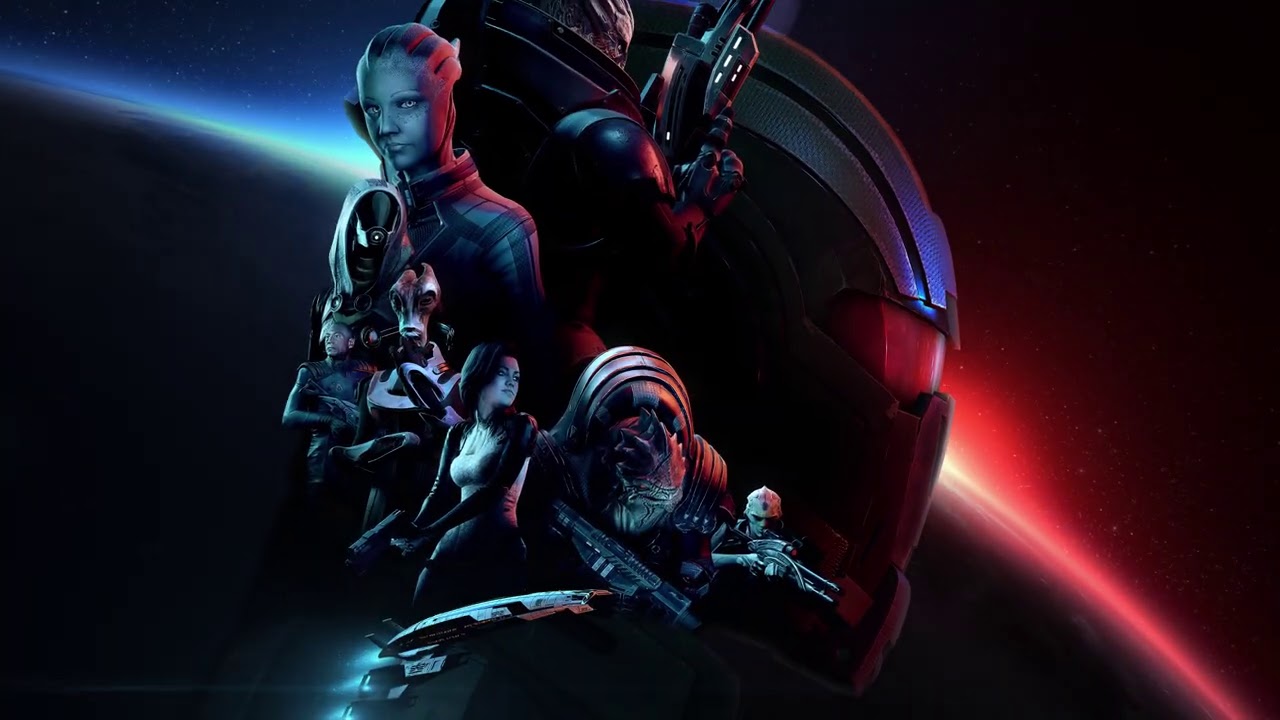 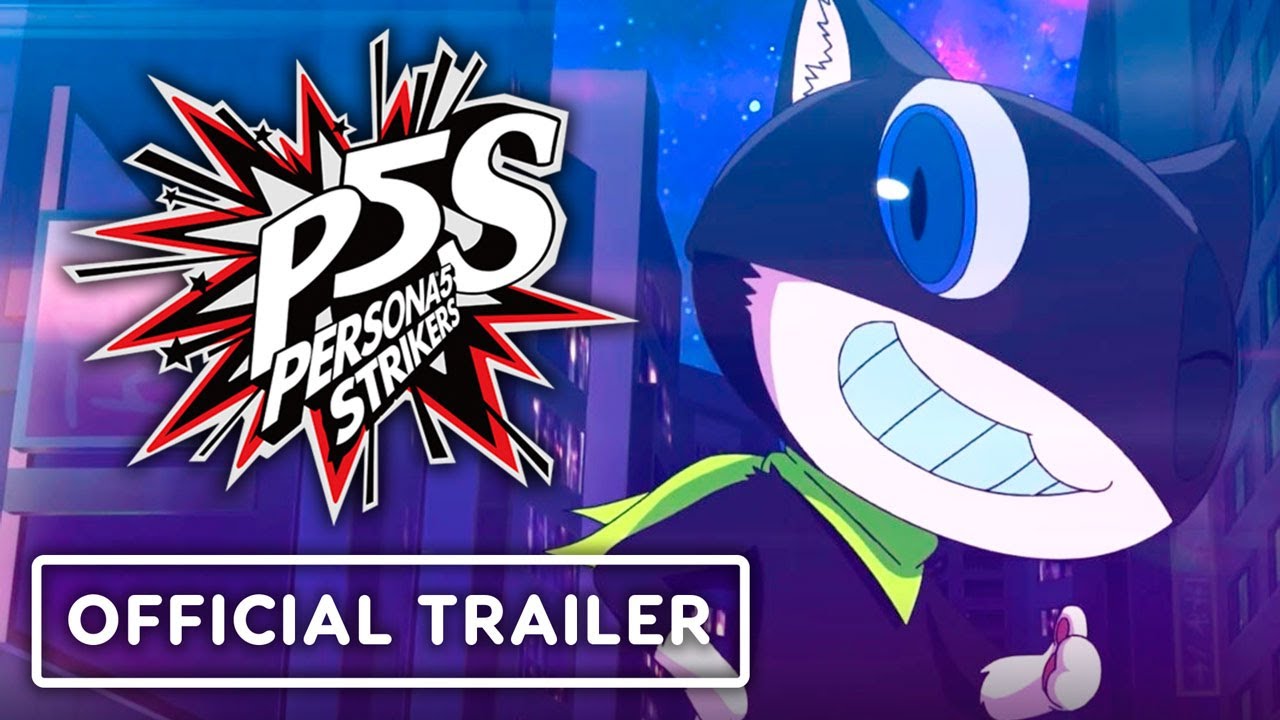 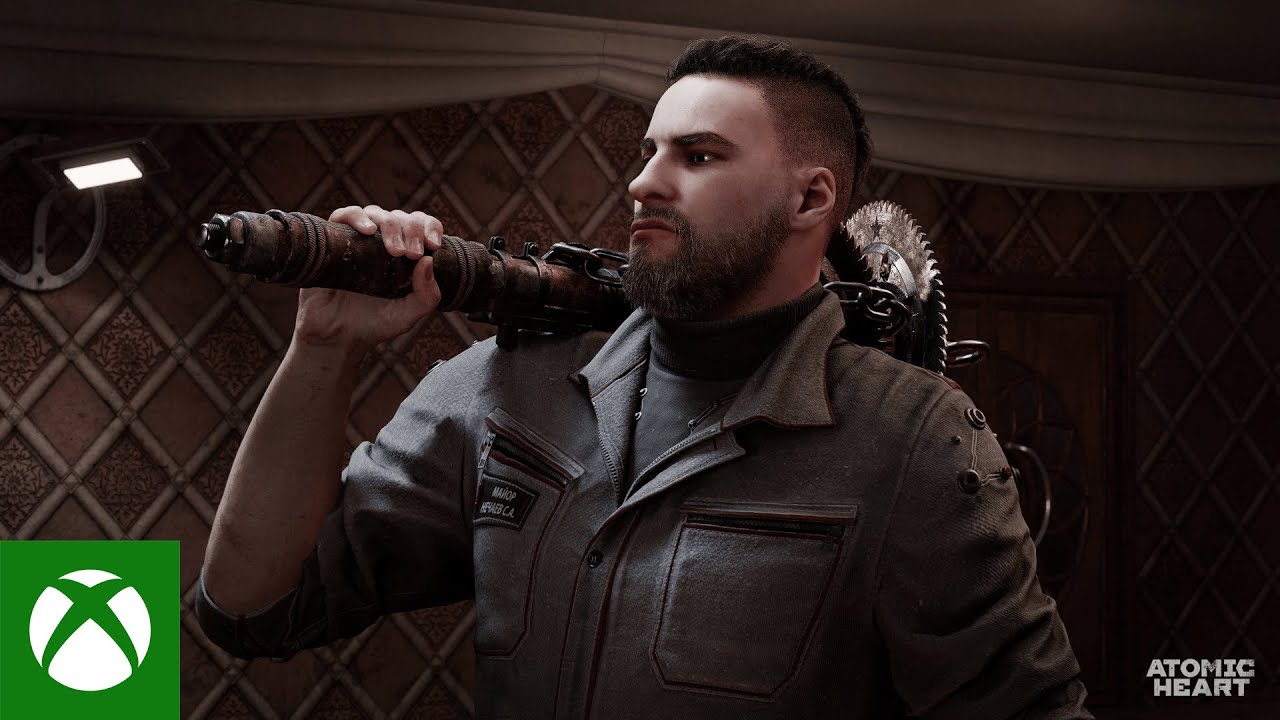